We are pleased to announce the winners of the 2020 Light Microscopy Australia Image Competition.

We had 116 eligible entries across the four categories and with so many beautiful images this year, it was very competitive.

Each category will award a $400 first prize and a $200 second prize. We would like to thank the sponsors of each category, Optiscan, Zeiss Australia and Nikon for their support of the competition.

Please follow the links below to see this years winners.

A Missed Connection – Within a culture of 100,000 mouse neuronal cells, a low rate transduction resulted in a few cells (such as these two) specially producing a protein of interest linked to GFP. Imaging only in the 488 line, makes them look as though they are not already integrated in dense networks (which they are), but rather, searching in emptiness, only just missing each other. Cells were recorded over hours using the Zeiss AxioObserver 7 at 20x objective magnitude.

There is Always More to Discover Underneath – This is a mixed culture of epithelial cells stably expressing LifeAct-GFP and LifeAct-TagRFPT. These markers are used to visualize the dynamic behaviour of the actin cytoskeleton. The movie was captured using a spinning disc confocal and displays the actin dynamics in both the apical and basal side of the same cells. At the apical side, actin localizes to cell-cell junctions where contractile networks are being build. At the same time, actin drives the formation of lamellipodia at the basal side, highlighting the fascinating dynamics of the actin cytoskeleton.

Joining the Australian Microbeam Analysis Society is a free option with an AMMS membership.

Joining Light Microscopy Australia is a free option with an AMMS membership.

Joining CRYOZ is a free option with an AMMS membership.

Joining Volume Imaging Australia is a free option with an AMMS membership. 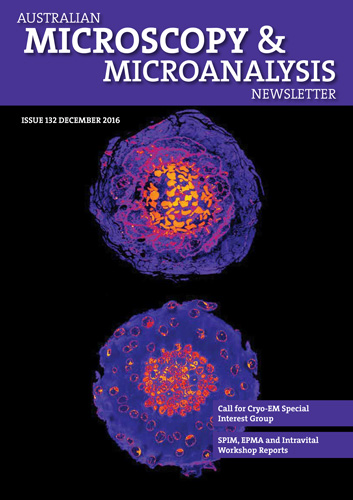